Fernando Luz has been awarded Top of Class at the 2016 AWARD School NSW graduation ceremony, which took place at The Loft in Sydney last night. Fernando was tutored by two agency groups; Justin Carew and Nigel Clark from Leo Burnett and Sarah Parris, Jerome Gaslain and Jon Foye from BWM Dentsu.

Close to 260 industry professionals, sponsors, media and graduates came together to celebrate the graduation of more than 100 NSW students who have now completed the preeminent training program for aspiring creatives and art directors in Australia and New Zealand.

Meet the NSW Top 3 students, check out the video


The final seven graduates to make the NSW top 10, in no particular order, include:


Preparing the graduates for the next step in their careers, AWARD Chair and Managing Partner of The Sweet Shop, Wilf Sweetland, said: "AWARD School is the pre-eminent, most highly sought after, and most highly regarded course in Australasia that teaches students how to think creatively. What these students have achieved over 12 weeks is an excellent grounding for a long and rewarding career in commercial creativity. We look forward to welcoming them into the industry, supporting their development and celebrating with them as they graduate this evening."

From more than 1000 submissions, a selection of 55 outstanding pieces were chosen for display by this year’s jury. NSW AWARD School Heads Niccola Phillips (Head of Art, M&C Saatchi), and Simon Jarosz, (Creative Director, MediaCom) congratulated the students on their work and achievements and thanked the tutors for their enthusiasm and commitment.

Commenting on the new judging process, Niccola said: “It was a pleasure and a privilege being one of the AWARD School heads for 2016. One of our major aims this year was to champion diversity, and we’re delighted to say that we succeeded with an unprecedented 50:50 gender split of successful applicants, and six out of the top ten ultimately being female.

We also wanted to ensure that the students’ work was carefully considered and seen by a number of Australia’s top creative directors, and by splitting the judging over three nights, every folio was given the attention it deserved. There was tighter curation of ‘The Wall’ this year, ensuring a consistently high calibre of the work on display, and the Top Ten were reviewed by two Executive Creative Directors on a dedicated night of judging to ensure that they were properly benchmarked and awarded fairly.”

A special thank you to the following tutors who mentored the students over the 3 month program. Click here to see who they are.

AWARD graduation ceremonies are still set to take place in Melbourne, Adelaide, Brisbane, and Perth. Dates for the upcoming ceremonies are as follows: 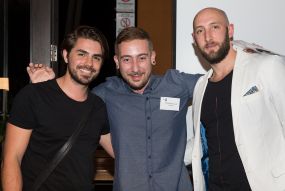 AWARD School is a 12 week intensive course for people who want to become Creatives, Copywriters or Art Directors in the communications industry.  It is a course about ideas, creative thinking and processes involved in coming up with great ideas. The course consists of evening lectures and tutorials by industry practitioners.  To be accepted into the course, each person must submit a portfolio of work based on the brief set by the Heads of AWARD School.

AWARD SCHool is sponsored by

AWARD was founded more than 30 years ago. AWARD, powered by The Communications Council, counts some of the finest creative minds from Australia, New Zealand and South East Asia amongst its members. AWARD is a community of like-minded and passionate individuals galvanised by the sole aim of raising creative standards in all forms of commercial communication. TCC is a non-political, non-profit organisation.